The Rose opened as a vaudeville house in 1907. We've experienced the transition to silent film, talkies, Technicolor, and now to digital projection across three unique screens, in addition to an online film library. We endeavor to bring the people of the Olympic Peninsula not only world-class film, but also high-definition ballet, opera, classical music and theatre from across the globe. We invite you to experience a film at the Rose or the Starlight Room, where the popcorn is fresh, the butter is real, the sound is superb, and every show is personally introduced. And if you're streaming a film from farther afield, welcome to the Rose!

A NOTE FROM ROCKY
I was waiting tables in a Mexican restaurant when the moment of resolve got hold of me. As surely as I was attempting to balance two plates of enchiladas, one black bean and guacamole quesadilla and a side of stuffed peppers, I knew I would open a movie theatre in Port Townsend.

I studied filmmaking at the University of Southern California. After a brief sojourn to Montana, I returned to the Northwest as a young husband, a young father and a young aspiring screenwriter. Like countless other urban expatriates, our little family settled in Port Townsend because of its proximity to and desirable distance from that Big City across the water.

Having grown up on a healthy diet of quality programming at the original Harvard Exit Theatre in Seattle, I longed for good movies and a neighborhood cinema that fostered a sense of community. And Port Townsend - in myriad ways - showed every sign of supporting a theatre as I envisioned it.  More than seven years after that moment of resolve, the Rose Theatre re-opened in the summer of 1992. The community came together not only to finance it, but to apply the final touches of paint.

That was nearly twenty-four years ago, and I find it just as difficult today to answer the question, What makes the Rose unique? The obvious answer would be the careful selection of movies and our stellar customer service. But the writer in me - still aspiring - needs a deeper answer, just as character requires motivation.

In his wonderful essay, "Here Is New York," E.B. White wrote of three New Yorks: the natives who give it solidity and continuity, the commuters who give the city its tidal restlessness, and the settlers who give it passion. It is the third group, White explained, "that accounts for New York's high strung disposition, its poetical deportment, its dedication to the arts, and its incomparable achievements."

Port Townsend, in a modest way, lives and breathes by the same recipe three thousand miles from that dizzying, vertical metropolis. The west may no longer be wild, but we still appreciate our landscape, and on the tip of this peninsula, surrounded by nature’s tidal restlessness, we write, we paint, we tango and collectively we watch dreams unfold at the Rose.

After all, it is the people and the stories we create that make this city and this jewel of a cinema unique.

HISTORY
Port Townsend enjoyed a lively theatre scene before the dawn of the twentieth century.  The Palace Theatre, The Standard, and the Learned Opera House showcased local talent and traveling vaudeville troupes "of the highest caliber."  The Rose, which opened around the corner on Water Street in 1907, continued this tradition but added a recent invention to its repertoire: moving pictures.  In December 1908 the Rose moved to its current location in Taylor Street.

Tom Mix, Mary Pickford, Douglas Fairbanks, Lillian Gish, and countless other Hollywood stars graced the Rose Theatre's silver screen for more than fifty years before it closed its doors November 8, 1958 with the potboiler High School Confidential.  The raked auditorium floor was soon lifted, and the building became home to a succession of businesses, including a bakery, pet shop and novelty store.  When Rocky Friedman and Phil Johnson began carefully restoring the theatre in 1992 they came upon a trove of artifacts in the attic--tickets, movie posters and projectors.

Three original murals were found on the walls of the theatre, buried under decades of wallpaper and paint.  Half of the pressed tin tiles on the ceiling of the main auditiorium are original.  The Rose reopened July 11, 1992, and with the addition of the Rosebud Cinema three years later, has become one of the most treasured features of Port Townsend's National Historic District.

Director Sydney Pollack paid us a visit in honor of our 15th anniversary celebration.

Choreographer Crystal Pite onstage for after our broadcast of her latest dance from the Nederlands Dans Theater.

Screenwriter Stewart Stern (A Rebel Without a Cause) was a regular guest at the Rose.

Always served up with real butter, our popcorn is popped fresh daily.  With some toppings from our spice bar, many locals make a meal out of it.

The Rose has inhabited its location on Taylor Street for over 100 years.

Performers on the Rose stage (take a peek--it still contains a trough for footlights).

This Week at the Rose 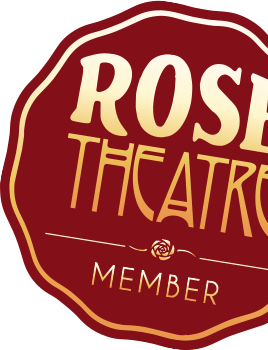 Movie posters don't always convey the essence of a story. But the two images for this week's new movies - THE ALPINIST and SPENCER - absolutely hit the mark.
Read More » An elegant evening at the movies
With a weekly selection of films, comfy sofas and local beer and wine, it's the perfect night out. Come see the stars among the stars, in this 3rd floor aerie.

The box office opens 30 minutes before the first show of the day.